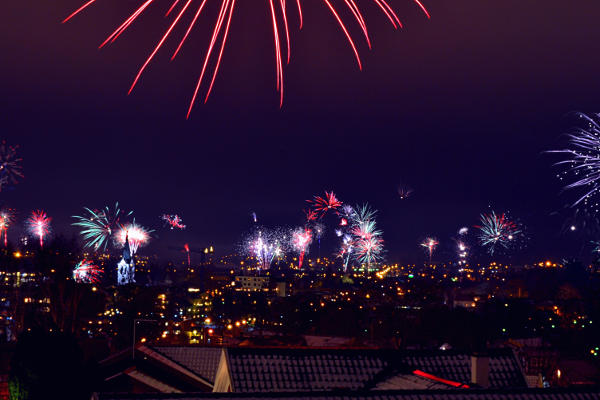 Celebrations of the Chinese New Year, the biggest occasion of the year, traditionally start one week before the New Year's Eve and continues beyond two weeks after the New Year's Day.  In some localities, the celebration extends over the entire first month!

It is also a tradition that people from afar, rich or poor, must make their way home for the New Year's Eve family unity dinner with their parents and the actual time for the dinner varies from family to family, very similar to the western Thanksgiving dinner tradition and atmosphere. Similarly, the time between the week before and after the New Year's Day is always the busiest travel season in China when literally hundreds of millions of the homecoming people are heading back to their hometowns and returning to their workplaces afterwards.

There are 12 symbolic animals, each representing a corresponding year, and "Tiger" is the third symbol in the Chinese zodiac cycle that recurs every twelve years.  This year, Feb. 14, 2010 is the New Year's Day for the Year of the Tiger according to the Chinese lunar calendar, coincidentally falling on the western Valentine's Day! The Year of the Tiger will end on Feb. 2, 2011 when the Year of the Rabbit begins on Feb. 3, 2011.

Further, because the Chinese culture also includes "5 elements" that assign special characteristics or association to the interpretation of the world, a/k/a: Chinese 5-Elements Astrology which is about Balance Theory of Five Elements of the Nature, the zodiac calendar in the Chinese culture is also so affected.  Those five elements are: Metal (金), Wood (木), Water (水), Fire (火) and Earth (土), one after another sequentially, adding a separate 5-year cycle of its own to the original 12-year cycle system. As a result, the combination of such promises a return of a year with the same unique characteristics every 60 years. This year is the Year of the Tiger with the characteristics of "Metal" (some may simply call it "gold" to add a glittering touch to it as gold is a valuable kind of metal), and the last time a "year of the tiger" with such "metallic" or "golden" characteristics was 60 years ago in 1950, although the last year of "a" Tiger was 12 years ago.

People born in the Year of the Tiger share certain characteristics, too, according to the Chinese culture. The Chinese word of "tiger" is “虎" pronounced as "hu", sign of courage, and its Western counterpart would be: Aquarius. Typical attributes associated with the characteristics in the Chinese zodiac interpretation includes: Courage, Vehemence, Self-Reliance, Friendliness, Hopefulness, Resilience, Vanity, and Disregard.

Happy and Prosperous New Year and Happy Valentine's Day, too!

Yu, South & Associates, Where YOU Matter The Most.